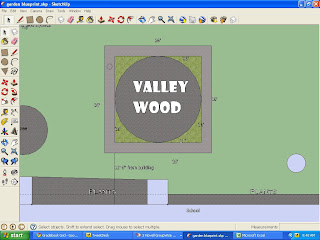 My landscaping class has been full of interesting math. So I thought I would try my hand at a version of WCYDWT We created this outside garden space last year:

Unfortunately over the summer some vandalism left this:

So this year’s landscaping class had the task of re-designing in Google Sketchup with the following goals/restrictions:

This open ended problem using a new tool (Sketchup) was very challenging for my 8th graders. We went outside, measured, and sketched the dimensions on graph paper. We then drew the school and existing landmarks in 2D using the tape measure too in Sketchup to make our model exact. Then the students drew their ideas for creating a new space. Their first attempts were much too large. We spent the next day figuring out the maximum square footage for two cubic yards of concrete (I did not plan this out well enough and I ended up doing most of the work-too helpful). Then they re-drew. I then tried to get the students to find an approximate area of their designs by breaking them into estimated rectangles (Again I should have planned better and been more clear in my expectations). This was the winning design: 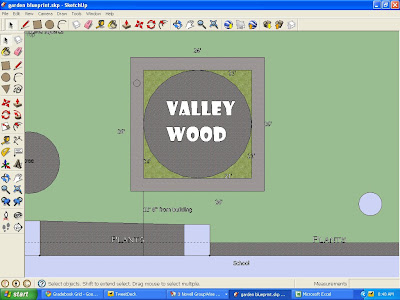 (Not my favorite, others were a bit more creative/artistic, but I wanted to give the students the right to pick)
The next day we went outside to stake it out. So how would you “construct” a square that is parallel to the building around an inscribed circle with a diameter of 21′ ? Remember you are not drawing it, but actually staking out the four corners. Give me your solution and is this problem accessible to the average 8th grader?

Spoiler alert: I was way too “helpful.” Unfortunately that is a theme of this project but that does not mean you can not learn from it. In my defense I had a different half of my class for multiple days due to the non-stop pullouts for Earth Day movie, Relay for Life, a trip to Michigan State University, students planting trees, chicken pox, suspensions, etc. and I need to get to the digging and building phase before we run out of days in the school year.